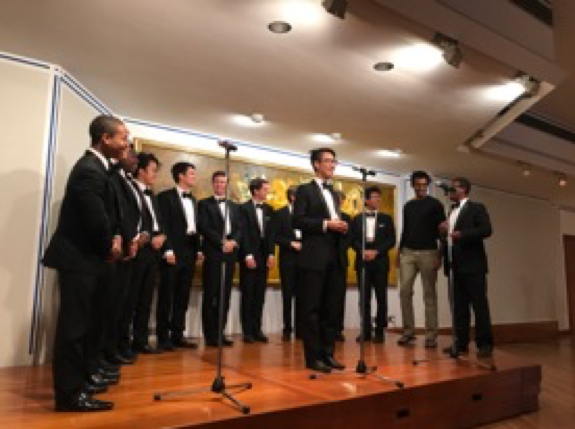 The Harvard Krokodiloes came to London at the end of their 2018 World Tour that took them to 14 countries on four continents. The previous time they were in London was 2016. True to Kroks tradition, the 12 young gentlemen made the most of their 3-day stay in London and had a jam-packed schedule. They managed to see quite a bit of London, including a private tour of the Houses of Parliament. They entertained Savoy Hotel guests with two concerts in the Atrium and also performed at the Macquarie Bank but saved their last hurrah for HCUK.

HCUK and the Ismaili Centre jointly presented the farewell concert on 11th August. It was a family-friendly, late afternoon event that took place at the Ismaili Centre. Although it was the middle of summer holidays, the Kroks performed to a full house of 150. Among the audience members were Harvard alumni, members of the Ismaili community and their friends and families.

Although the Kroks had been on the road and living off suitcases for 12 weeks by the time they came to London, they still brought the house down. The farewell concert was particularly special because that was the likely last time that those 12 would sing together as a group (some of them have just graduated from Harvard as members of the Class of 2018). Humour featured prominently in their one-hour concert but the significance of the more poignant numbers was not lost on anyone in the audience. They performed “Jerusalem” as a nod to their host culture. And instead of ending with the traditional “Loch Lomond”, they chose “Every time we say goodbye” as a very fitting and tear-jerking last number.

The Harvard Young Alumni committee hosted an after-party for the Kroks in a private event room at a near-by pub after the concert. The Kroks pledged to be back next summer.

We want to thank our host, the Ismaili Centre, for their generous hospitality and impressive attention to detail. They provided all the food, drinks and services and organised professional sound engineering and photography. Their support was pivotal to the success of the grand finale of the Kroks’ tour.