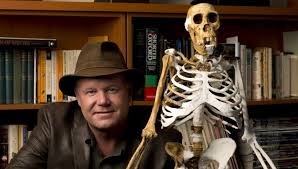 Exploring the Origins of Humanity – Prof. Lee Berger -SOLD OUT

Prof. Lee Berger- Explorer in Residence at the National Geographic Society and Research Professor in Human Evolution and the Public Understanding of Science at the Evolutionary Studies Institute, University of the Witwatersrand, South Africa

Exploring the Origins of Humanity

In this engaging talk, Prof. Berger will explore some of the latest finds out of Africa that are fundamentally altering our understanding of the origins of humankind.  From the breath-taking discoveries of the most complete early hominin skeletons ever discovered from the South African site of Malapa, to the recent Rising Star Expedition which resulted in the discovery of the richest early human ancestor assemblage ever discovered on the continent of Africa, Berger will both entertain and enlighten with stories of the dangerous expeditions deep underground that were required to recover these important fossils, and explain how these latest discoveries are transforming our understanding of the pathways to humanity, and of what it means to be human.

Prof. Lee R. Berger Ph.D. D.Sc. FRSSAf ASSAf is an award-winning researcher, explorer, author, palaeoanthropologist and speaker. He is the recipient of the National Geographic Society’s first Prize for Research and Exploration and the Academy of Achievement’s Golden Plate Award. His work has brought him recognition as a Fellow of the Royal Society of South Africa, the Explorer’s Club and the South African Academy of Sciences.  He holds and has held prominent advisory positions including the Chairmanship of the Fulbright Commission of South Africa, the Committee for nomination of the UNESCO Cradle of Humankind World Heritage Site, the Senior Advisory Board of the Global Young Academy and the Centre of Excellence in PalaeoSciences of South Africa among many others. He has been awarded several humanitarian awards including the Boy Scout Medal of Honor for saving a life and the Red Cross Certificate of Merit.

Berger was born in Shawnee Mission Kansas and grew up in rural Georgia. He was awarded his Eagle Scout in 1983 achieving his silver and gold palms.

Berger is presently the Research Professor in Human Evolution and the Public Understanding of Science at the University of the Witwatersrand, Johannesburg, South Africa and an Explorer in Residence at the National Geographic Society. He holds a Ph.D. in palaeoanthropology and a Doctor of Science in the same field.

He began his work in Africa with the Richard Leakey’s Harvard University Koobi-Fora Field School in 1989 and since then, his explorations into human origins on the African continent, Asia and Micronesia for the past two and a half decades have resulted in many new discoveries, including the most complete early hominin fossils ever discovered that belong to a new species of early human ancestor -Australopithecus sediba.  His contributions to exploration sciences have also resulted in advances in the field of applied exploration methods and the application of technology to exploration, excavation and discovery.

He is the author of more than two hundred scholarly and popular works including more than 100 refereed papers and a number of academic and popular books on palaeontology, natural history, and exploration.  His work has been featured three times on the cover of Science, and has been named the top 100 science stories of the year by Time, Scientific American and Discover Magazine on numerous occasions. He has appeared in many television documentaries on subjects related to archaeology, palaeoanthropology and natural history.

He was a founder of the Palaeoanthropological Scientific Trust which today is the largest non-profit organization in Africa supporting research into Human Origins and founding Trustee of the Jane Goodall Society of South Africa.  He is Director of one of the largest palaeontological projects in history, leading over 100 researchers in investigations of the Malapa site in South Africa as well as leading the Rising Star Expedition in 2013 resulting in the discovery of the largest primitive hominin assemblage in history.

In addition his efforts in conservation have been recognized by the William T. Hornaday Award and Georgia’s Youth Conservationist of the Year. His Rising Star Expedition was awarded South Africa’s highest team science prize – the Science Team Award – in 2014.